One of the highlights of these past weeks has been the Van Gogh Museum. This was the first time we were able to go to an event in person, so it was an amazing experience to see everyone from class! Safety precautions were implemented such as mandatory mask wearing, social distancing, and hand sanitation that was accessible throughout the building. The building itself was modern and had a minimalist feeling on the inside. My friends and I entered the building and were escorted to the second floor where we waited in line for our turn. When it was our turn, we entered a bare looking room filled with a couple sitting chairs and two mirror objects. Many people were sitting on the ground, so I assumed that was part of the show’s experience. The lights suddenly dimmed, and scenes of Van Gogh’s artwork suddenly sprawled out onto the walls and the flooring. It was a projection performance that creatively presented Van Gog’s artworks such as his Dutch windmills, Japanese Sakura trees, a Starry Night, and various other pieces. 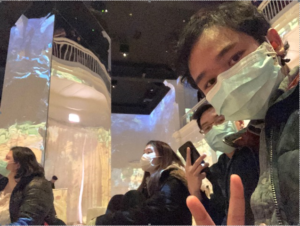 What was unique about this performance was how people made his artwork come to life through the use of computer animation and special effects. They also added music to each artwork which really set the tone. The performance went on for about 20 minutes before coming to a close. Afterwards, everyone was ushered downstairs to the gift shop and bar area. I have to say, it was one of the best performances I’ve experienced this semester so far! And I highly recommend anyone to watch it. 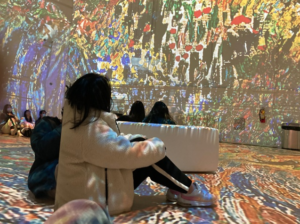 In terms of my internship, we recently received some new donations such as new backpacks, shoes, shirts, and coats. Our site had a shortage on a couple of these items, so it felt awesome to finally be restocked. I also met the new person who will be re-joining our social services team. She told me of her experience interning at Chicago Lights and how she faced challenging moments as well, but also explained how she was able to rise above them. I found that very inspiring. It reminded me of how far I’ve come with my internship and how much I’ve learned since being here. I can’t believe we have only 5 ½ weeks left! It makes me grateful to have such a wonderful team to work with and thankful to have a field supervisor that really cares about me.